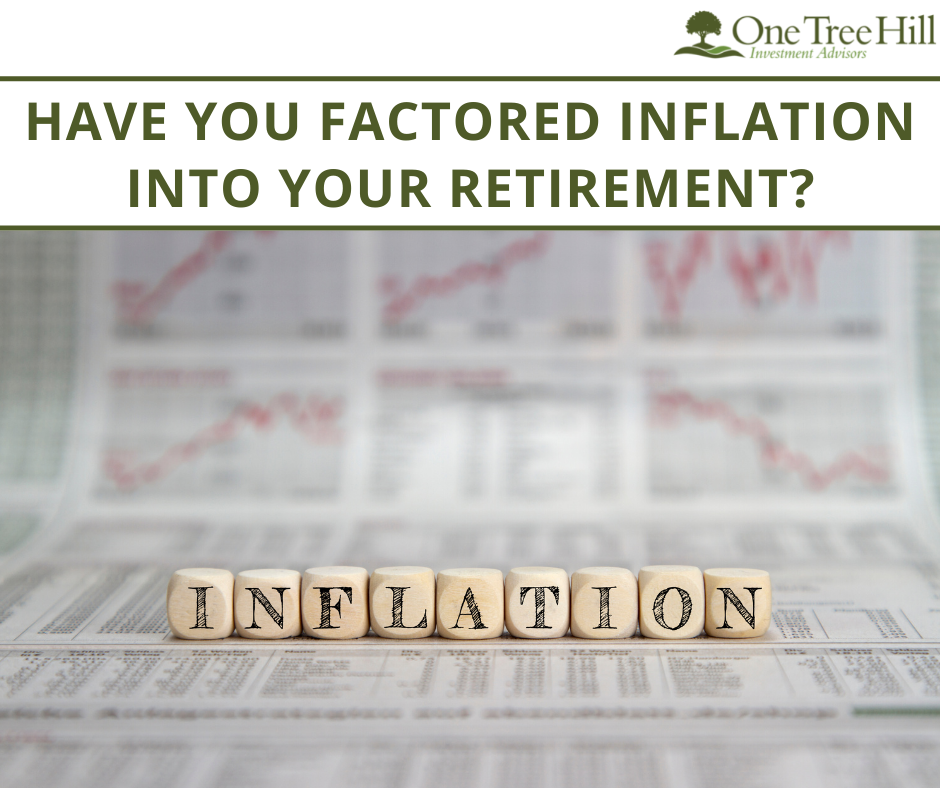 Have You Factored Inflation Into Your Retirement?

Your retirement portfolio might be up, but inflation is crushing your returns

On August 11th, the U.S. Bureau of Labor Statistics reported that the Consumer Price Index increased 5.4% over the past 12 months. Shockingly, media outlets ran with absurd headlines like these: “Inflation is Not as Bad as Feared” and “Inflation Fears Moderate” and even this one: “Core Inflation Starts to Ease.”

Ok, maybe it’s technically true that inflation “only” rose 0.5% in July after rising 0.9% in June, but an increase of 0.5% every month is going to bring annual inflation north of 6%. Maybe this will hit home more: that 10% return on your portfolio is not 10% after inflation. Not even close.

Maybe you don’t worry about some of the underlying data in the most recent inflation numbers? Maybe it doesn’t bother you that over the past 12 months:

Well, you should remember this: Inflation can do a number on retirees’ incomes. Most people don’t think about that, but with longer lifespans, we run a real risk of seeing our retirement savings eaten away. Curbing its impact takes planning.

Inflation Lessons from a Paper Route

I learned that lesson early from my newspaper route when I was 10 years old, delivering the Patriot Ledger in Massachusetts. I had a Schwinn Stingray bike, with baseball cards in the spokes. Because I delivered every day without fail, the kickstand wore out. So my pedal constantly hit the stand. You heard me coming halfway up the block.

On Fridays, I collected the week’s newspaper payment from the customers on my route. The weekly delivery cost was 90 cents, and several of my customers gave me a dollar, which meant a 10-cent tip.  This was the 1970s, an era of rapid inflation. The newspaper then announced an increase in the delivery cost to $1. And I didn’t think much of it.

The next Friday, I arrived at my first stop, the home of a friendly elderly woman. Her expression was pained as I approached the door.  She said she knew about the price increase, but she could not give me anything more than the $1. She realized that there would be no tip for me.  She informed me that the ever-increasing cost of everything was crushing her. She could not keep up with the inflation.

At several stops that Friday afternoon, I heard the same sad tale. I discussed the situation with my mom that night, telling her I never wanted to be in that position when I was older. She gave me the motherly advice of “study hard, so you can make a good living.” Thanks mom.

What You Can Do About Inflation

It’s actually quite simple: one should consider addressing the inflation issue early – when still a pre-retiree. Planning ahead and understanding the risks is paramount.

This issue is a big concern for today’s retirees. They will likely experience a longer retirement than any other generation ever. They need to prepare for the insidious damage done by regularly increasing costs over the decades.

On behalf of your 85-year-old self, plan ahead to establish lifestyle-sustaining income. Your financial professional can help.

The opinions voiced in this material are for general information only and are not intended to provide specific advice or recommendations for any individual.

All information is believed to be from reliable sources; however LPL Financial makes no representation as to its completeness or accuracy.

This article was prepared by FMeX.