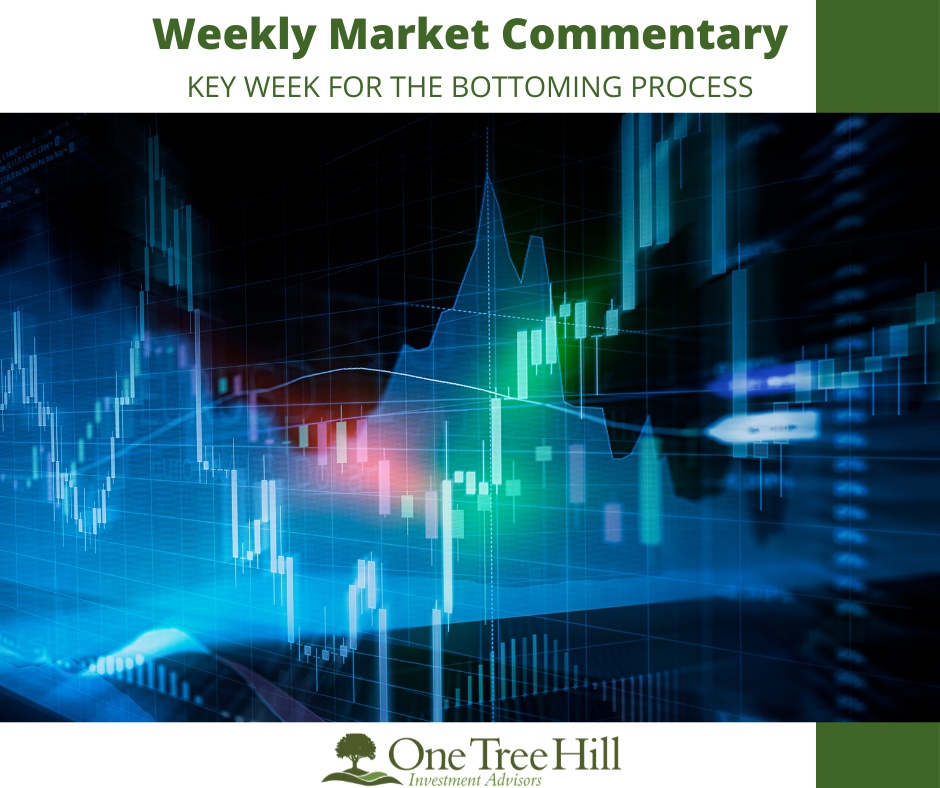 Key Week For The Bottoming Process

Last week, we revised our economic and market forecasts as the war against the COVID-19 pandemic wages on. We are likely in recession now, though we won’t know that for sure until more timely data is released.

What is clear, however, is stocks have priced in a recession. We offer our latest thoughts on the bottoming process and take a deeper dive into our updated economic and market forecasts.

WHERE WE ARE
The global COVID-19 pandemic is one of the most difficult human crises we have ever faced. In addition to the tragic human toll, containment efforts and uncertainty have caused significant economic disruption globally and driven stocks into a bear market for the first time in more than a decade. We will get through this, but it remains tough to see the other side from where we sit today.

Last week we provided our Road to Recovery Playbook. Unfortunately, we don’t yet have evidence of a peak in COVID-19 cases in the United States—the baseline of our playbook. However, the experience in China provides some reassurance that containment efforts can work. When new cases begin to stabilize, we think stocks may make some headway. Until then, market volatility will likely remain elevated.

HISTORIC SPIKE IN JOBLESS CLAIMS ON ITS WAY
Looking for evidence of the duration and severity of a likely contraction in the US economy is one of the pages in the playbook. Initial jobless claims, released every Thursday, is one set of data that may help us determine duration and severity because it gives us a more real-time view.

After sitting at 50-year lows of about 200,000 weekly claims for the past two years, initial filings for jobless claims jumped from 211,000 to 281,000 for the reporting week ending March 14. Over the next four weeks, given the swiftness and severity of the crisis, we may see a record number of initial filings for jobless claims—potentially passing the near-700,000 peaks of the early 1980s and 2009 [Figure 1]. The number of job losses
may allow markets to gauge the severity of the potential recession and move closer to beginning a recovery. 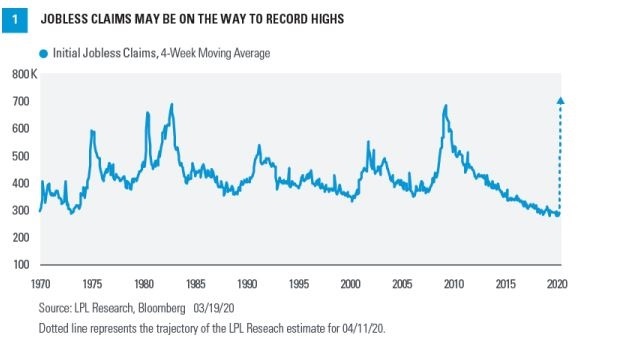 US ECONOMY LIKELY ENTERING RECESSION
The uncertainty around the scope of the outbreak makes forecasting economic growth difficult—especially before we see more data that reflects its impact. But in an effort to be transparent and give investors some sense of where economies and markets might be headed, we provided revised economic and market forecasts
last week [Figure 2]. We included our current base case expectations, and a potential more bearish scenario to consider.

In the United States, containment efforts have become increasingly aggressive, which has added to the near-term downside for economic growth and may likely topple the US economy into a swift but possibly deep recession. Potentially as much as 10% of the US economy has been significantly impacted by the outbreak, including companies tied to travel, leisure, and entertainment, and brick-and-mortar retail, restaurants, and commodities-related industries.

The US economy has been impacted in a number of ways. It started with supply chain disruptions for corporate America, less demand from Asia, and reduced travel. Next came the hit to energy producers from the collapse in oil prices and reduced consumer spending as people increasingly stayed home. Then came a “negative wealth effect” from stock market losses and tightening credit markets that have been putting additional strain on many businesses. What began as a crisis of confidence has transitioned to a business crisis, and the US economy may shrink by several percentage points during the second quarter as a result.

We continue to expect consumers and businesses may drive an economic recovery after the virus is contained. Timing is uncertain, but positive steps are being taken. The irony is the more severe the economic hit, the quicker the economy can begin to heal. 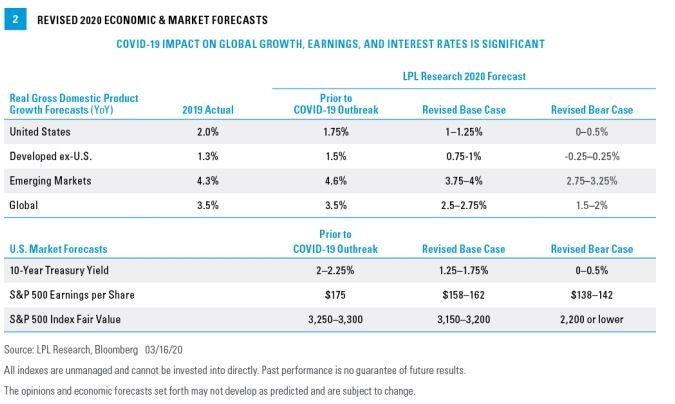 Factoring in a rebound in the second half of 2020, we still see prospects for near 1% gross domestic product (GDP) growth in the United States in 2020, but it will be back-end loaded, which means the growth will not come until the back half of the year. Depending on how long containment takes, there may be some downside risk to that forecast. If we have a protracted US recession, full-year 2020 GDP growth potentially may be flat.

On a more optimistic note, the US economy was in pretty good shape before COVID-19 struck, which we believe may help us weather the storm.

EMERGING MARKETS
In our updated global economic growth forecasts, we start with emerging markets. China essentially has the outbreak contained, but the damage to its economy earlier this year was significant. We may begin to see an economic rebound in the second quarter—businesses in China are already ramping up again—which could get China’s economy back near its pre-outbreak trend growth run rate by year-end. That path likely may leave China’s growth a percentage point or two short of Bloomberg’s consensus 2020 GDP growth forecast of 5.3%.

China’s impact plus the broader region’s commodity exposure may prevent overall emerging market GDP growth in 2020 from reaching 4%, compared with our prior 4.6% forecast. A 3.75% GDP growth forecast for the region would require a steady recovery from this point on. Our downside scenario puts emerging market
GDP below 3%.

COVID-19 disruptions have likely put much of Europe in recession, and even with a rebound in the second half of the year, any growth this year may be a stretch at this point. Italy has reported more COVID-19 deaths than China as of March 20 and has undertaken extreme containment measures, including shutting down allretail except for drug stores and grocery stores. Neither France, Germany, Spain, nor the United Kingdom (UK) has seen the number of new cases in their countries begin to stabilize. Bloomberg-tracked consensus
for European Union (EU) GDP growth near 1% in 2020 appears unattainable at this time.

The Japanese economy probably entered recession after a consumption tax went into effect in October 2019, with its fourth quarter GDP contracting by more than a 6% annualized rate. Outbreak containment efforts and weaker export markets may add to the weakness, with lower energy import costs providing only a small offset. We expect the Japanese economy may contract this year, consistent with Bloomberg’s consensus 2020 GDP growth forecast of -0.6%.

Factoring in the rest of the developed international economies, we estimate growth overall of 0.75–1% in 2020, but we acknowledge the possibility of a full-year contraction due to significant uncertainty.

GLOBAL
Considering the economic impact on the US, emerging, and developed-international economies, we think global GDP growth may not reach 2.5% in 2020. If the pandemic still is not contained well into the summer—not our expectation—it’s possible the global economy could slow to less than 2% GDP growth this year.

The economic disruption from the containment efforts and the impact to the energy sector may make it difficult for corporate America to grow earnings in 2020. We think $158–162 may be a reasonable range for S&P 500 Index earnings per share (EPS) this year, which would represent a mild earnings recession and the first earnings recession since 2016. Achieving that level of earnings, however, would require a relatively quick resumption of somewhat normal business activity, leading to a second-half recovery. If containment efforts take longer that we expect and the US economy ends up in recession into the summer, we estimate S&P 500 EPS may be closer to $140. FactSet’s consensus estimate currently is $170 per share.

We continue to believe our previous 2020 estimate of $175 is a reasonable target for 2021, based on what we know now. Markets may soon begin to look to 2021 expectations to gauge the intermediate-term opportunity in stocks at more attractive valuations. Even though investors may have to wait longer for those earnings to materialize, we think an S&P 500 year-end 2020 fair value target of 3,150–3,200 may be reasonable in a second-half economic recovery scenario, if the outbreak is contained quickly. This fair value target is based
on a price-to-earnings (P/E) ratio of 18 supported by lower interest rates, and S&P 500 EPS of $175 in 2021.

We believe stock prices have fallen to levels we would consider very attractive based on our assessment of economic and market fundamentals. That has us thinking about upgrading our equities recommendation to overweight from market weight as we continue to follow our Road to Recovery Playbook to gauge progress
on the market’s bottoming process.

For now, our best advice for long-term investors would be to stay the course, possibly consider adding equities in appropriate strategies to bring portfolios more in line with their original targets, and focus on the long term. This will be a key week for the bottoming process.

We will get through this together, but given the short-term uncertainty, we believe caution is warranted while we wait for evidence that containment efforts are working and the policy response will be sufficient to restore investor confidence.

We will continue to keep you updated on our views on the economy and markets as this challenging situation develops. Everyone stay well.