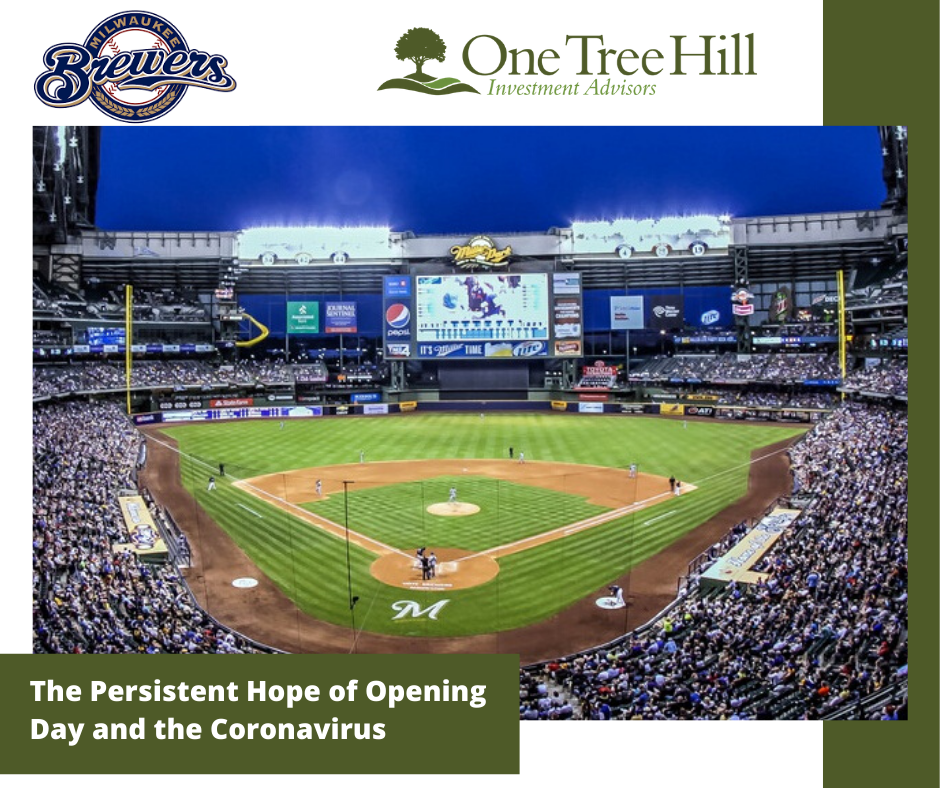 The Persistent Hope of Opening Day and the Coronavirus

Opening Day for the 2020 Major League Baseball season was scheduled for March 26th, but due to the coronavirus, MLB announced that the season would be postponed until the Center for Disease Control lifts their restriction on events of more than 50 people.

This is the first time MLB games have been put on hold since the season was paused for a week after the September 11th attacks.

Commissioner Robert D. Manfred, Jr. said in a statement that:

“MLB will keep fans updated on decisions regarding plans for the 2020 schedule in the days and weeks ahead. The Clubs remain committed to playing as many games as possible when the season begins.”

For every team, as writers have written over the years, “Hope springs eternal.” And in the spring of 2020, we need to hold onto that hope.

So, how long has baseball had Opening Days? This is the 145th season of the National League, which began in 1876. From 1876 to the present, every year has had an Opening Day.

US presidents have been part of Opening Day for over 100 years. Since President William Howard Taft threw out the ceremonial first pitch of the 1910 season, every president has thrown out the first pitch on Opening Day at least once. President Franklin D. Roosevelt did it eight times, halting the practice during World War II. President Harry Truman did it seven times. As a matter of fact, President Truman threw first pitches with both his right and left arms in 1950.

Some games on Opening Day have been especially memorable:

Only two teams have played continuously since 1876, the Chicago Cubs and the Atlanta (originally Boston) Braves. Talk about persistence… Year in and year out, whether in good times or bad, these two teams have returned for Opening Day.

The Cubs provide a particularly persistent example of hope. Before their 2016 World Series victory, the Cubs last won the World Series in 1908, back when Kaiser Wilhelm and Tsar Nicholas II still enjoyed their Empires.

The Boston Red Sox also maintained their optimism. After selling the contract of Babe Ruth to the Yankees, the Red Sox waited 84 more years before another World Series title in 2004. Even after making what many consider to be the worst deal in sports history, the Red Sox came up with many great players over the years, enjoying many winning seasons. And then they won the World Series three times in ten years and again in 2018.

Fans of the Pittsburgh Pirates never gave up hope, either. The once proud Pirates, with past World Series titles and many Hall of Fame players, endured 20-consecutive losing seasons, from 1993 to 2012. This marks the longest streak of seasons with losing records in professional sports history. However, after careful planning, restructuring, and analysis of its players and the competition, the Pirates have had more recent winning seasons and playoff appearances.

These baseball teams and their fans did not abandon the cause, drop all of their players, or give up on the proven baseball strategies for success. They kept plugging away. Team management reviewed the team’s status every year. They changed players as needed, sometimes in a planned way, and sometimes because of a sudden injury. They adjusted their rosters and their strategies to fit the situation and the competition.

Baseball had been around for a very long time, but Major League Baseball began in 1876. Stocks had been traded, but the stock market’s first index – the Dow Jones Industrial Average – was created in 1896. And since the DJIA was created, as of the summer of 2018, only one of the original member companies remained in the DJIA, General Electric. Sadly, that came to an end as GE was booted out of the DJIA and replaced by Walgreens.

As with all stocks (and baseball teams), GE has had good and bad years, has adjusted its holdings, its personnel, and its strategies. And every year, the company keeps plugging away – although a quick review of its stock price shows it has really struggled since the beginning of 2017.

The stock market as a whole, including GE and many other companies, has experienced its fair share of up and down years. It crashed in 1929, lasted through the Great Depression, and weathered various financial crises due to wars, oil prices, foreign asset bubbles, currency adjustments, the housing market, 9/11 and now the coronavirus.

However, just like baseball teams, year in and year out, whether in good times or bad, companies and investors continue to show up for business. After careful planning and as-needed adjustments, they remain hopeful. Wise investors do not abandon the cause or the proven financial strategies for success.

Despite bad seasons or strings of bad seasons, each team’s fans hope for the best. Fans don’t drop their teams. Baseball team owners don’t abandon ship just because things are not going as planned (well, sometimes they abandon cities, but that’s another story altogether). Successful team owners and managers keep level heads, carefully adjust their rosters and their strategies, and stay hopeful. Even when they don’t win championships, they still win games.

Successful financial professionals and investors would be wise to follow the same strategies. Remain level-headed, plan carefully based on resources and the market, and then succeed.

Financial professionals typically remind clients to review their investments yearly, usually at the end of the year. However, in the spirit of hopefulness, what if clients reviewed their investments on Baseball’s Opening Day, when “Hope springs eternal”?

The opinions voiced in this material are for general information only and are not intended to provide specific advice or recommendations for any individual.

This article was prepared by RSW Publishing.